Audi Brings Virtual Reality In Every Car With Holoride 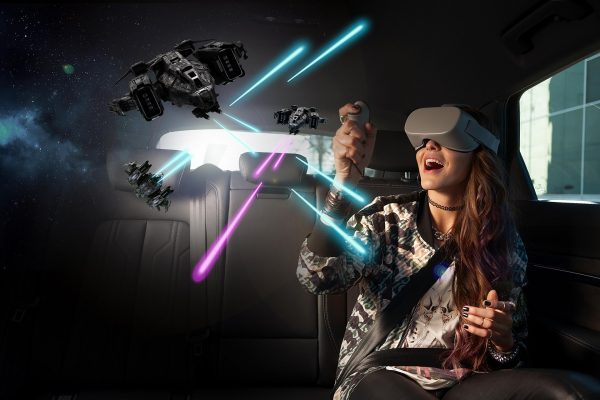 Audi is planning to help relieve the boredom in its vehicles with an in-car virtual reality gaming experience using Holoride technology. According to the company, this technology will be available in its cars within three years. The Audi Holoride technology was unveiled at this year’s Consumer Electronics Show in Las Vegas. Consumers will be able to have a virtual reality experience that syncs with the motion of the car, thereby turning every road-trip into a wondrous VR experience.

The synchronization is such that if a vehicle makes a turn, the player will be able to make a curve around an opposing spaceship in VR. The spaceship in the VR experience will also accelerate if the Audi E-Tron accelerates.

The Audi Holoride will deploy an open platform that is also used by other automakers and which is also open to developers interested in creating more virtual reality experiences. However, Audi only deployed the technology in showcasing the Marvel’s Avengers: Rocket’s Rescue Run, a virtual reality game where the user is inside the spaceship in the Guardians of the Galaxy movie.

This is not Audi’s first foray into a Marvel experience. In Iron Man, Tony Stark receives the keys for an Audi R8 in a famous scene. Audi is also expected to enter into further partnerships with Marvel into the future. There could be more Holoride games that are based on a variety of Marvel characters.

One of the best features of the Holoride VR experience is its ability to sync the virtual world with the real world motion of the car but in the future, you can expect to see even more complex implementations. One possibility might be the ability to leverage vehicle-to-infrastructure communications to simulate various traffic events into the player’s virtual reality experience. There is always the room to continuously elevate the experience and give users something really marvelous.

By syncing the VR world with the real world, Audi’s Holoride experience combines virtual reality with augmented reality technologies to create an Extended Reality. Audi has also added more dimensions to the extended reality experience. With the Holoride, Audi mapped out various data points such as speed, location, steering, acceleration as well as braking and then matched these real world actions in the vehicle with a virtual world. This has a created an Extended Reality journey that is perfectly synchronized, entertaining the backseat passenger in artificial world that is somehow tethered to the real world.

According to Audi, this synced experience won’t be boring even for the passenger using the same route on a daily basis. The Holoride experience will offer passengers greater variety through new and diverse experiences every time. It will contain an elastic experience that gives users something new every time they use the app.

The Audi Holoride technology has been developed by the Audi Electronics Venture GmBH engineers and was first presented at this year’s CES in Las Vegas. Audi worked with the Games and Interactive Experiences experts at Disney to build the first virtual worlds in the project, thereby bringing to live various stories and characters to life within an auto-environment. It’s guaranteed to take in-vehicle entertainment to a whole new level.

Audi expects the Holoride to be available to car owners in three years. Syncing the virtual reality with the real world will certainly be a new and exciting experience but for now, the wait is on. In the dynamic world of innovations in the emerging technologies, three years is still a long way off.