2019 Predictions For The Commercial Drone Industry With Svilen Rangelov 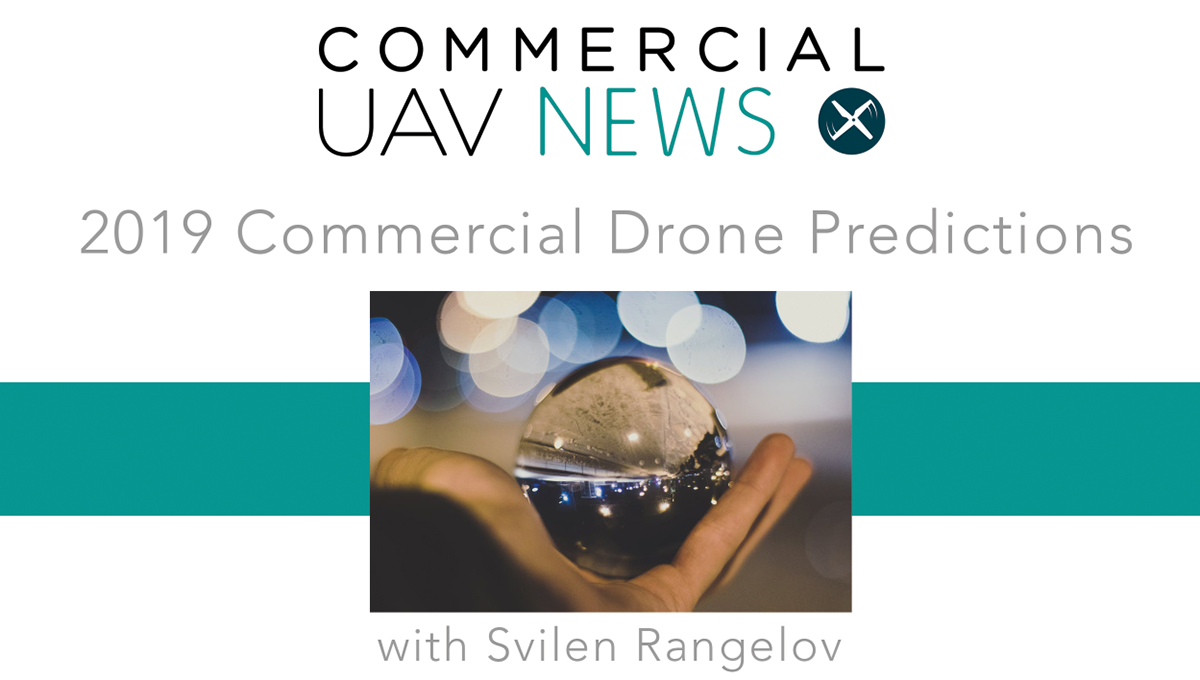 It’s been over five years since Amazon CEO Jeff Bezos showcased “octocopter” delivery drones, and said they’d be operational in five years’ time, delivering packages in various countries. While the company has made some progress with commercial drone delivery, regulators and operators across the world still have a great deal of work to do in order to truly unlock the potential of these applications.

Svilen Rangelov, CEO and co-founder of Dronamics, believes that 2019 will be a year when we see significant process in the expectations and regulations that currently exist for drones across the world. He believes customers of e-commerce platforms will expect faster, free-of-charge delivery of their goods worldwide and that while trade tensions internationally will slow the pace of growth of airfreight, overall 2019 will see more cargo flown than 2018. Most critically though, he believes more countries and governments from all over the planet will be open to trialing and potentially adopting UAV technology as a solution to numerous challenges related to everything from logistics to cost.

We talked with Svilen to further explore these predictions and discover more about what he sees taking place across the UAV market landscape for 2019.

Jeremiah Karpowicz: How will upcoming regulation in Europe impact how countries and governments across the continent enable the technology? How will these potential changes impact the collaboration between UAV developers & manufacturers, regulators, airlines and logistic companies?

Svilen Rangelov: On a technical level, the upcoming regulation in Europe will formalize the shift from a weight-based approach to a risk- and performance-based one, with the regulatory framework that EASA has already shown. The regulatory framework serves as a good indication of what the actual regulation adopted by the European Commission will include. In other words, the regulations would acknowledge that a drone flying over, say, a large crowd in a city, should be treated differently than the same drone over a farm field, which is much more in line with what the industry believes to be appropriate than the previous, weight-based rules that some national regulators defaulted to, and still do.

Keep in mind that reliability adds weight to any system, and so weight could be a friend to safety if used properly. To focus only on kinetic energy means to automatically believe that all systems are equally hopeless, and even if one was to assume that this was true at some point in the beginning of the drone revolution, you have some manufacturers and developers going to great lengths to produce very reliable systems now, even in the consumer space. To their credit, EASA had this shift in their proposals years ago. However, the legislative process in the EU takes quite a long time, so I’m sure both EASA and the industry will be very happy to see this on the books at last.

After all, on a business level, uncertainty is worse than restrictiveness, and despite the proposals serving as good indications, it’s another thing when proposals become law. Once the law is clear, that’s when investment can happen on a meaningful scale. Also, collaboration between different stakeholders can truly begin. Until now, partnering across industry was difficult because uncertainty meant different players could have different perceptions of regulatory risk. Now that we’re going to have those regulations formalized, businesses can formulate much clearer paths and roadmaps to collaboration, and the B2B sector can really pick up.

You mentioned that trade tensions internationally will slow the pace of growth of airfreight, but that we’ll see more cargo flown in 2019 than 2018. Will this be more due to consumer demand, economic opportunities, changes to the technology, or something else?

This will be due to consumer demand that does and will continue to grow, albeit more cautiously. There are a lot of talks about an upcoming big shock or a hard reset. However, unlike the previous downturn, where the culprit was well anticipated—the housing market— when people picked a side on a single two-sided bet, now the potential culprits are quite a few, trade tensions being just one. This means the bets one must make to hedge their current positions are more distributed. Ironically, this brings more diversification, but it also means that correcting their position would take more time and instead of one big off-a-cliff shock there may be several, smaller ones. Consumers, accordingly, will keep looking for the other shoe to drop, and the next one, and the next one, so the slowdown will be … slowed down. Lastly, because the trade war is a big part of the worry, multinationals’ natural response is reconfiguring supply chains, which means more business for the fastest mode of transport, as companies look to keep production and delivery commitments on schedule while this shift is happening.

Will regulation or economic realities be a bigger factor in the effort to utilize drones to democratize airfreight and lower the cost of shipping?

We’ve often said that shipping costs act like a tax that disproportionately punishes those that live or produce outside of the main centers of commerce. It simply requires energy to move atoms, and unlike digital goods, moving physical goods will always cost something, so our mission has always been to reduce this something to as little as possible. We’ve proven that the technology is here, so it is only up to the regulations to let technology respond to economic realities.

Consider this: for the billions of people around the world living in cities, all their needs can be met within the same day. For the other half, time moves a lot more slowly and trade is a lot more costly. An entrepreneur from a small town or a village can only sell to her fellow villagers, and if she is to sell her product to the big city, she must offer a lower price to accommodate the cost of shipping the goods in order to keep the retail price the same as her competitors from the city. Shipping, as a hidden tax on anything that comes in and out, contributes greatly to the increasing rural exodus resulting in a great strain on urban infrastructure. We have the opportunity to alleviate this by providing economic opportunity in remote and rural areas. It is only up to regulators to allow that to happen, to allow the other half of the world to get closer to enjoying the same benefits of urban life without actually living in an urban center.

What sort of items do you think we’ll newly see being delivered via drone in 2019?

If we’re talking about small delivery drones, I do hope that in 2019 we’ll finally see goods start being delivered via drone not just as a marketing stunt, and not as a money-losing fake-it-till-you-make-it demonstrator. However, I honestly doubt it, and the reason is simple: the reliability vs cost trade-off of small drones is still years away from making them both safe and economically viable. Tests by some of the largest manufacturers in the world show that to meet a 10-7 reliability level and transport 1.5 kg with a multirotor, you need a 20kg+ system AND throw away your batteries after 1.5 hours of operation. Numbers like these completely ruin the economics for drone delivery and the industry needs some serious breakthroughs to advance through that. This is why we continue to believe that larger systems will have an easier time getting commercialized because they can accommodate more redundancies and additional systems to ensure reliability. As for the goods, we believe e-commerce, pharma, perishables and humanitarian cargo have the most to benefit from unmanned deliveries.

What are you personally looking forward to seeing happen/develop in the commercial drone space in 2019?

We anticipate a lot of progress being made on the regulatory front in 2019, and this is the part we are looking forward to the most. When the Chicago Convention was signed in 1944, aviation had already existed for decades, so a lot of credit goes to regulators around the world who have been proactive in understanding how drones are a mix of old and new considerations in just a few short years. With the EU and others formalizing their rules and serving as guides to the rest, we anticipate 2019 will greatly accelerate the industry in clarifying both technical requirements and paths to adoption and integration into the airspace, and we couldn’t be more excited about that.