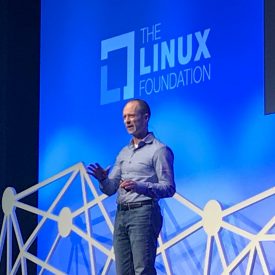 When the governing board of Hyperledger approved a new supply chain project earlier this month, it marked a significant departure for the open-source blockchain consortium.

Sawtooth Supply Chain, as the project is provisionally called, breaks new ground because it’s arguably the consortium’s first to really inhabit the application layer of the software stack. It’s built on top of the Sawtooth framework, which Intel contributed to Hyperledger.

Prior to this, Hyperledger confined its work to the lower layers and eschewed the custom-design of blockchain application code with industry players in mind. That job was left to vendors to carry out in a proprietary manner – as IBM has been doing in its now-live food-tracking supply chain platform with the likes of Walmart.

Nevertheless, nine of the 11 Technical Steering Committee (TSC) members voted in favor of the new project on December 6. The approval of Sawtooth Supply Chain as a high-level project massively heightens its profile and means it enters Hyperledger’s formal project lifecycle and receives the support which goes along with that (community outreach, marketing, security review, etc.).

This happened over the objections of the other two members of the TSC, who questioned whether the project belonged within the scope of Hyperledger, CoinDesk has learned. Notably, both of them work at IBM: Arnaud Le Hors, who was absent from the vote, and Chris Ferris, the former TSC chair, who was present but abstained.

From the sidelines of the enterprise blockchain world, it looks like a tug-of-war has broken out, with IBM and its favored Hyperledger implementation, known as Fabric, on the one side, and the Intel-backed Sawtooth on the other. The latter team also has a budding champion in the form of newly appointed TSC chair, and Sawtooth lead maintainer, Dan Middleton of Intel.

As well as doing engineering further up the stack at the application layer, Sawtooth Supply Chain is the first project sponsored by a non-tech company, U.S. food giant Cargill. As such, the supply chain project, which has yet to be given a permanent name, will likely speed toward faster deployment than its Hyperledger peers. And given Cargill’s involvement, it is a prospective rival to IBM’s Food Trust.

However, the stakes are higher than a potential competition between supply chain-focused platforms coming out of Hyperledger, as the tensions point to bigger questions around governance.

While IBM argues that putting Hyperledger’s imprimatur on an app-level project could undermine the consortium’s position as a neutral player, others characterized the tech giant’s resistance to the proposal as an attempt to stifle competition.

“This is fundamentally a discussion about what is open source software,” said James Mitchell, CEO of Bitwise, which wrote the bulk of Sawtooth 1.0 code and is contributing to the supply chain project. “And is the structure of an organization like Hyperledger ultimately to be protectionist around a set of commercial interests, or does it have a different set of goals?”

One way to look at the tensions over the supply chain project is as a sign of Hyperledger growing past its origins as an IBM-dominated organization.

Choosing his words carefully, TSC chair Middleton told CoinDesk that part of his job is to ensure diversity within Hyperledger and to retain those strengths from which blockchain gains its preeminence.

He acknowledged that IBM has been a big contributor to Hyperledger and to the open source effort, as have Intel and a lot of other organizations.

“I think it’s important that no one of those organizations undermines the legitimacy of having an open source organization where we are all developing code transparently. We just want to make sure that we have a good balance among all the contributors,” said Middleton.

Mitchell of Bitwise was less diplomatic, claiming that IBM, with its early proliferation of Fabric, has used Hyperledger (and the consortium’s affiliation with the Linux Foundation) as a way to market its services to enterprises – what he called “open-source washing.”

“You want to be able to tell a story about how you are building open source solutions. But where it matters, which is the bulk of the application code, you want to be able to retain proprietary ownership of intellectual property and be able to monetize the solution at that level,” Mitchell said of IBM’s blockchain strategy to date.

“I think people are savvy to this; they realize they don’t want to be paying rent to a large technology provider for the next two decades on these solutions,” he added.

Michell warned that blockchain may represent an even more aggressive form of lock-in than previous enterprise software licensing, once an industry adopts a particular lingua franca of how business is transacted.

“Based on conversations we have had with industry partners we are working with, like Cargill and others, we strongly believe industry needs to own those solutions,” rather than the vendors, said Mitchell.

This could take the form of closed-source, shared ownership amongst those parties, he said, or, better yet, open source software that those industries are building, contributing to and sharing.

In expressing his concerns about widening the scope of Hyperledger to promote the Sawtooth supply chain project, IBM’s Ferris said this was his personal view and not an IBM-related matter.

“When we set up Hyperledger initially, we said we would not go into the application space. And we did that for a reason, because we want people to take the frameworks we are building and leverage them. We didn’t want to be perceived somehow as competition to someone who is legitimately trying to build a solution around supply chain.”

Ferris added that the components being built in the new supply chain project are “pretty specific” to Sawtooth right now. That concerned him because, according to Hyperledger Governing Board guidance, top-level tools projects also need to be seen to support multiple frameworks rather than being overly focused on one.

Rather than be elevated to a top-level project, Sawtooth Supply Chain, in his opinion, should have been placed in Hyperledger Labs. This is where projects deemed too early for TSC approval for incubation, such as sample code from hackathons or research projects, are placed. If a Labs project wants to enter incubation and become a formal project, a project proposal must be submitted for TSC consideration.

Regarding Middleton’s point about the need for greater diversity within Hyperledger, Ferris said this has been addressed, particularly over the last year or so, as many developers from a range of organizations have joined the community. IBM now accounts for maybe 30 percent of the total contributions, he said.

“In Fabric, we are about 40 percent of that total. I mean, it used to be 100 percent. So the number is constantly coming down. Yes, IBM is very committed to the success of Hyperledger. But by the same token, we are also trying not to be overbearing in that investment, “ said Ferris.

Gari Singh, a distinguished engineer and blockchain CTO at IBM, added that while it can be flattering to hear how much IBM has done with Fabric, the lack of contributions from other big industry players is frustrating.

“So you look at Oracle running Fabric; Amazon and their new managed blockchain service actually takes the Fabric samples and uses it, but no contributions back. There are contributions coming but they are coming from the start-ups – we would actually like to see it from the big guys,” said Singh.

Elsewhere at last week’s Hyperledger Forum in Basel, Switzerland, some important members of the community took the opportunity to show their respect to IBM.

Casey Kuhlman, CEO of Monax, said the fact that the Sawtooth Supply Chain project has been brought under the auspices of Hyperledger speaks for itself; despite misgivings, IBM ultimately did not stand in the project’s way, he said, adding that in his opinion Big Blue has behaved like a “very reasonable member of the community.”

“Their actions have been, in my opinion, very reasonably self-serving,” Kuhlman said. “Because at the end of the day we are all businesses and we are all trying to make money. We are all self-interested. We should be.”

Hyperledger director Brian Behlendorf said that while evolution is happening within the organization, the focus is still going to be on things that can be generally applicable.

“It’s not going to be just to solving Cargill’s needs for a reusable body of code or template or recipe or whatever for a large number of use cases,” said Behlendorf.

Speaking to the success of the first Hyperledger Global Forum, which saw hundreds of firms from across a wide range of industries descend on Basel for four days of talks and workshops, Behlendorf also wanted to pay due respect to IBM, concluding,

“We would absolutely not be here if it were not for them.”

Editor’s Note: The headline for this story has been updated for clarity.