This Is How Coronavirus Can Affect Bitcoin | Here’s Why 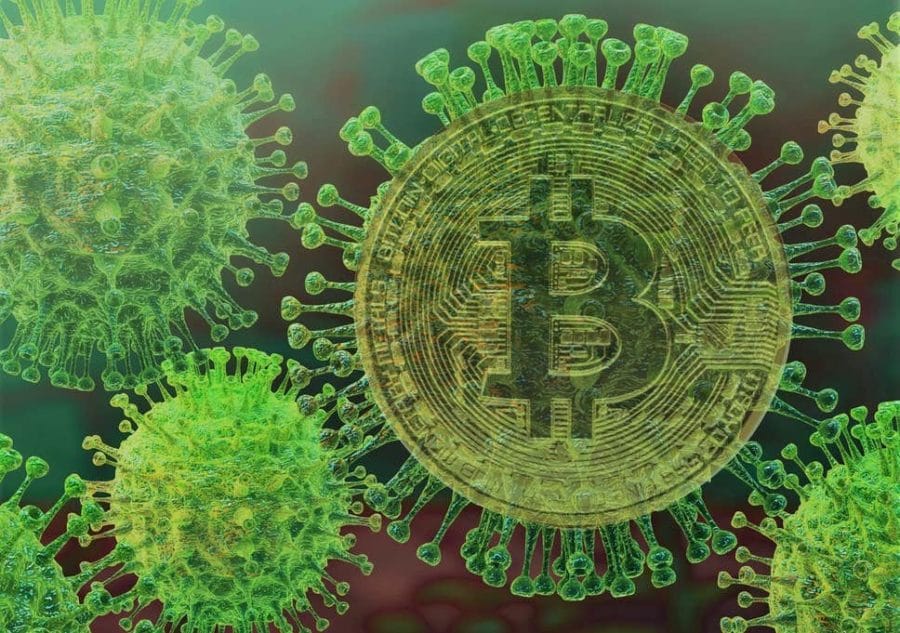 While the crypto market is currently going through an increase in prices, the coronavirus has also increased its victim count at a fast rate. But how can this new virus strain impact the number one cryptocurrency, Bitcoin?

Investors are dreading that the spread of the coronavirus will deeply impact major industries from China, such as manufacturing, materials, consumer goods, as well as crypto.

Bitcoin managed to reach a new yearly high, continuing to show bullish signs, as the Chinese stock market saw a sharp drop after it reopened from its prolonged Lunar New Year break.

Several drastic measures were implemented by many countries, but China, in particular, in order to stop or at least slow down the spread of the virus.

This means that many businesses are implementing precautionary measures, such as asking people to work remotely to minimize human to human contact, as the virus is spread through body substances found in sneezing and coughing. Countries are also limiting access to planes and other means of transport at their borders, some even completely halting all flights from China.

With these measures, there might be some effects that will reflect in the price of Bitcoin sooner or later. Here are some of the ways in which the coronavirus can affect Bitcoin.

It is obvious that worldwide there will be an economic loss, as China is a big producer and manufacturer for some of the biggest businesses on the market. Even tech giant Apple is anticipating to experience massive losses to growth. A senior analyst further explained that “Were it not for the coronavirus, the sustainability of the performance in China would not be called into question … (It) is an important risk that investors need to monitor.”

Small to medium businesses will also be affected, as cash flow from customer purchases will dwindle severely.

However, Bitcoin mining is still continuing its operations at almost regular capacity, as machines are mainly responsible for the process.

Mining factories do not need a large number of employees, which, in theory, should not affect the mining process that much. While there have been some mining farms that have had delays in new shipments of computing chips and supplies, the facilities have learned to adapt and still function according to normal parameters.

If there will be more restrictions implemented because of the Coronavirus, such shortages will probably affect all aspects of mining, as the companies will not be able to update the machines and hardware parts.

According to BTC.top, on February 4th, CEO Jiang Zhuoer closed one of his mining farms from a remote region in China, as he was forced to shut down all the mining machines because of the outbreak. MicroBT, a crypto hardware manufacturer, also announced that they are delaying shipments.

As electricity and mining resources are less costly in the Xinjiang, Inner Mongolia, Yunnan, and Sichuan areas, China is one of the enormous markets for Bitcoin miners.

The biggest 5 mining companies are all based in China, and combined have control of 50% of all computing power on the Bitcoin network, according to TokenAnalyst’s research.

Bitmain and Canaan Creative are the top main mining chip producers in China, with the former being responsible for making 66% of the world’s crypto mining hardware.

Because of the virus epidemic, Bitmain, Canaan, and MicroBT have released public notices on their website in which they announced postponements in their after-sale services, stating that they will resume operations on February 10th.

Many events and conferences from the crypto and blockchain world have also postponed their initial dates. Top events, such as niTROn2020 in Seoul, Hong Kong Blockchain Week 2020, and Token2049 have delayed their starting date.

The TOKEN2049 crypto conference, which was scheduled to start on March 17-18 and take place in Hong Kong, has been rescheduled to happen in October, citing the virus as the main concern.

“Over the past weeks, we have been monitoring the global developments around the Coronavirus closely. Whilst Hong Kong is managing the situation well and has taken strict precautions to contain any potential impact, uncertainty prevails,” announced the organizers of the event.

The post went on to state that the venue and schedule for the event will remain the same, even though the date has been moved. New speakers have already signed up, meaning that the agenda may change.

DeFiner, a crypto lending startup, also canceled its 10-city tour for investors because of the coronavirus.

“At Binance, we prioritize everyone’s health and safety during our events, and amid this global public health emergency, we have committed to do the right thing and protect would-be attendees from health risks associated with public gatherings. Thus, we have to postpone this event,” the exchange wrote Feb. 3.

Binance has not released new dates for their event.

There has been a slowdown in mining difficulty, which indicates that miners were unable to procure new updated hardware for mining. This is suspected to be a direct result of the quarantine imposed by Chinese authorities, which prevented mining equipment manufacturers from producing and shipping their hardware.

The mining difficulty is the computing power needed to solve mathematical equations, so that the miner can mine a new block and get the Bitcoin reward. The mining difficulty was adjusted on Feb. 11, with 0.52 percent higher than 2 weeks ago. This shows a great drop from the growth levels that were experienced on Jan. 28 and 14, which were 4.67 and 7.08 percent, respectively.

“Many miners have been phasing out older mining machines and buying new and more powerful models as we get closer to the halving,” said the co-founder and CEO of crypto lending startup DeFiner, Jason Wu.

According to Wu, mining farms have begun upgrading old machines, such as Bitmain’s Antminer S7 and S9 since the second half of 2019.

“The outbreak may have delayed the transition and contributed to the slow growth in mining difficulty,” stated Wu.

The Asia-Pacific region is currently home to twenty of the top 50 crypto exchanges and accounts for almost 40% of Bitcoin transactions that were processed in the first half of 2019, revealed Chainalysis data. The research firm also concluded that most exchanges are based in China.

CEO of international finance specialists deVere Group, Nigel Green, believes that, during virus epidemics, Bitcoin will be the currency at an advantage, not fiat.

“The ongoing upward trajectory of the price of bitcoin correlates to the spread of the coronavirus,” he remarked.

“The more individual cases that are identified, the more countries around the world that are affected, and the greater the impact on traditional financial markets, the higher the price of bitcoin has jumped.”

Chicago-based analyst, JH Winterburn, also sees potential growth for Bitcoin, as on the chart, BTC has already gone past the resistance level of $10,000.

“The reaction of the Chinese market goes way beyond what was expected when trading returned after the Lunar break,” he stated.

“A serious and localised health scare almost exclusive to one country will always have a potentially devastating effect on that country’s materials economy – history has told us that many times.”

“We can see several large buy-ins on BTC this last few days have come from China, so it is obvious what is happening, but we’re also seeing a fragility in the crypto market too that is perhaps being propped up by this activity.

“We must keep in mind that bitcoin was beginning to build towards a bullish outlook weeks before the world began taking coronavirus seriously – and that makes placing all your chips on BTC repeating the highs of 2017 a risky gamble.”

“Events like the coronavirus are unfortunately going to be more ‘normal’ than ‘black swan’ over the coming decades,” stated the CEO of Flipside Crypto, Dave Balter. “The impact on specific industries will be felt, but that will become part of the new normal.”

If the coronavirus outbreak will have ramifications into the price of Bitcoin is still an issue up for debate. Some speculate that this event will factor growth for cryptocurrencies, while others do not see strong correlations with other assets.