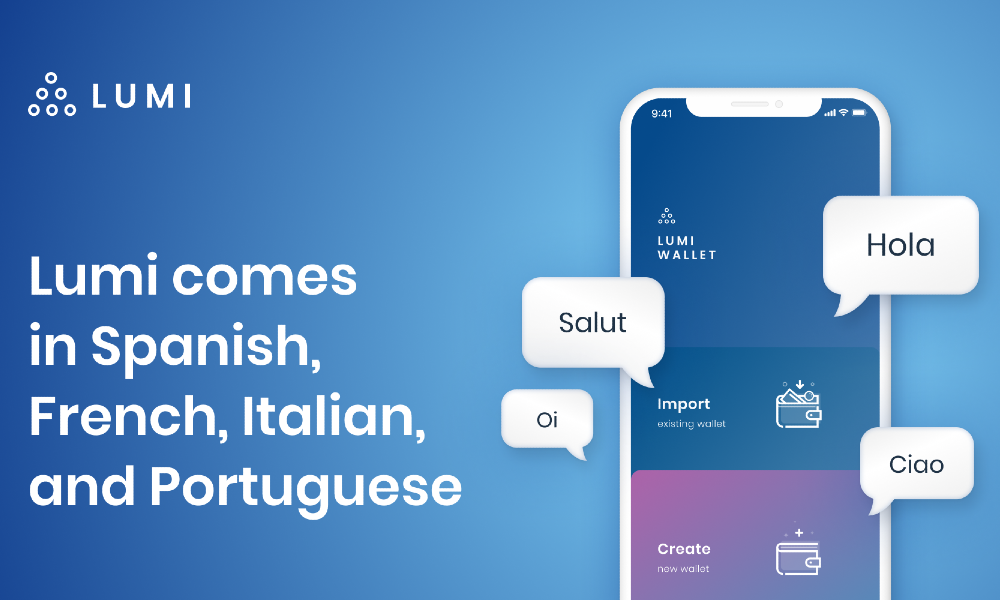 A multi-currency wallet with a competitive new feature 0% fee exchange now fully supports 4 new European languages. In the last update, Lumi has introduced a set of new features, open-source, and continues to connect with international audiences in their language.

The wallet focuses on high anonymity and security is built for the comfort of professional users and ease of entry for newcomers. Therefore the development team monitors the popularity of the wallet in different countries and provides full localization for regions that are choosing Lumi – it already has localizations in Japanese, Korean, Russian, and German.

This time, a whole package of new localizations in Spanish, French, Portuguese, and Italian is available on iOS and Android. The work has been done by professional translators, and every screen and line of text was translated into languages popular in the Lumi community. Now the wallet officially supports all of the most popular European languages!

The safe and functional crypto solution

In the last update, Lumi has offered its users a unique feature – a 0% fee on a crypto exchange. The feature is activated in the app by promocode HEYHEY. This makes an exchange in Lumi as cheap as on external exchanges, but much more secure – as the wallet is client-side, which means it does not store any user info and it has recently become open-source.

Lumi wallet was released in 2017 and since then it has established itself as a trustworthy wallet with a lot of privacy and a convenient UI, which makes the entry threshold for new users pretty low. One of Lumi’s distinctive features is the option to buy and sell bitcoin using a credit card without leaving the wallet or compromising all your funds to some third party – thanks to the non-custodial nature of the wallet.

As Diana Furman, the CEO of Lumi said, ”We want to turn to our most faithful user base and provide them with localizations in their languages”.

Lumi’s goal is to speak the same language as every user, both to be understood and to hear feedback. Lumi Wallet will continue to grow and introduce new localizations along with new updates to the functionality, making the experience of using the wallet more wholesome.

So you don’t miss news and updates by Lumi, the wallet’s team is active on twitter and telegram, and also it has a lively blog. If you have some suggestions about translation into your language or just want to say hi – don’t hesitate to send your emails to [email protected].