Home / Bitcoin News /How Does The Drop In Oil Prices Affect Cryptocurrency?

How Does The Drop In Oil Prices Affect Cryptocurrency? 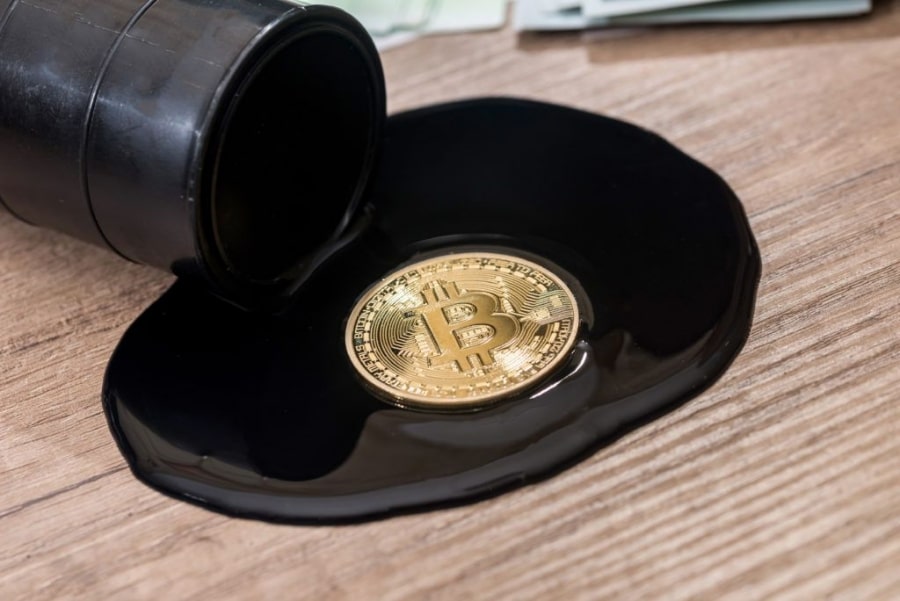 Because of the COVID 19 outbreak, all markets have been affected, and an unprecedented event that occurred today is that the overall oil prices turned negative for the first time. How will this drop affect the cryptocurrency market?

Why Have Oil Prices Gone Negative?

But while the prices are in the negative, this does not mean that oil is sold for free. The reason why the oil price is in this situation is that transports halted at a global level and thus resulted in oil tanks to rapidly fill up and to create a demand loss.

This forced traders to pay additional taxes to get rid of the oil as no one needed it. The West Texas Intermediate crude contract for May tanked more than 100% on Monday, marking the first time the price was in the negative. The contract expires on Tuesday.

The lack of demand for oil made the price drop to an abysmal minus $37.63 a barrel, from a positive price of $30, as recorded last Friday. The June contract dropped 15 percent to approx.  $21 a barrel, which represents a loss of 60 percent in 2020.

Futures contracts are programmed to execute at a specific delivery date. When the contract nears its expiration date, the price typically lines up with the physical price of oil as the final buyers of the contracts, such as refineries or airlines, have to pay the actual physical transport of the oil. This means that traders start buying next month’s futures contract, as the previous ones reach their expiration date. 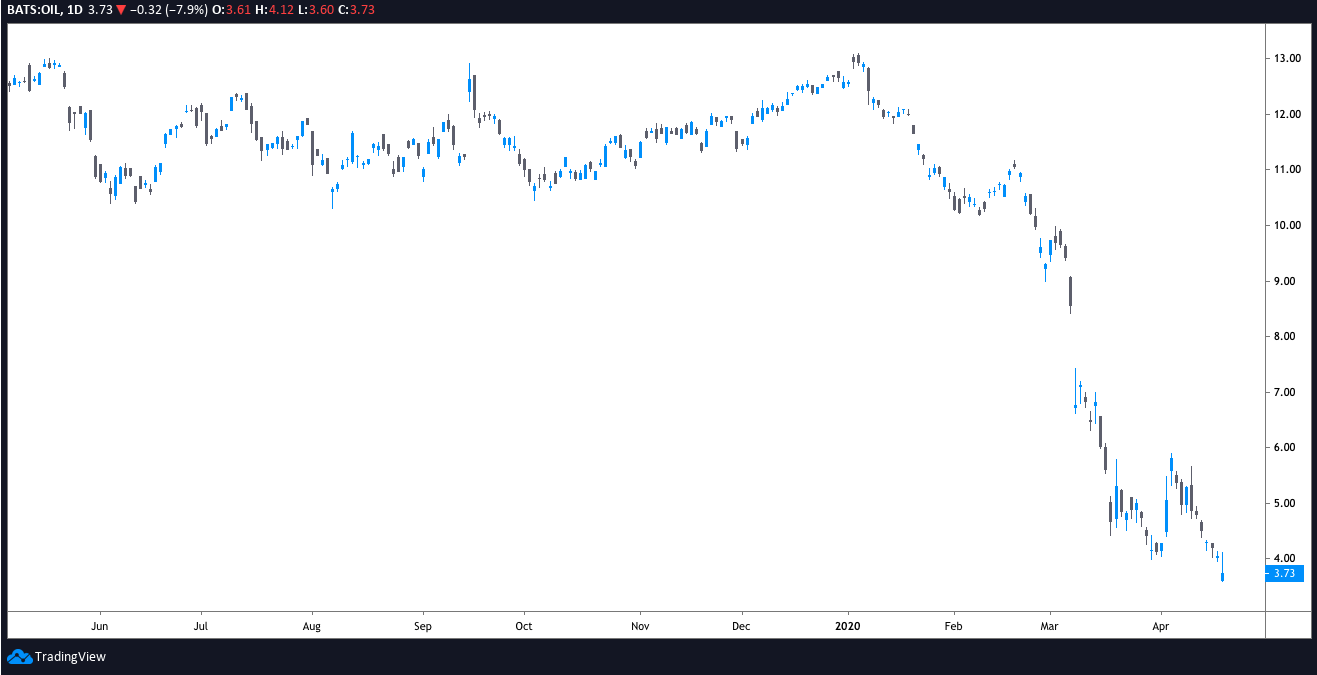 Futures contracts, in this case, execute the physical delivery of the underlying commodity there are tied to. Some people speculate the market of these contracts, while others buy and sell them if they use the actual commodity itself.

Futures contracts trade on a monthly basis. This means that after the May contract expires on Tuesday, oil prices could bounce back to $20.

The U.S. Oil Fund that tracks the price of several futures contracts based on oil, saw a loss of 10%.

Trading volumes were also affected when it comes to the May contract. A report from CME Group shows that the volume was around 126,400 this month when in June, the contract had a volume of around 800,000.

The crash in oil prices has made the U.S. stocks and bonds be wary of future drops. Recovery for these prices will take longer than initially expected. The S&P 500 index dropped with 1.7 percent, while U.S. Treasury bonds experienced an increase of dollars, which propelled the two-year yields down to 5 percent. Bond yields increase when prices go up.

Gold also increased on Monday with 0.86 percent to $1,713.40 per troy ounce. The British equity index FTSE 100 was also impacted near the end of its trading day on Monday, closing less than a percent while it initially started with strong gains. That afternoon the price started to fall, which caused worries for traders in the energy sector.

The Nikkei 225 index in Asian markets dropped by 1.15 percent. According to Japan’s Ministry of Finance, low trading data were reported, with a decline of 11% in exports and a 5% drop in March.

The Crypto Markets and Oil Prices 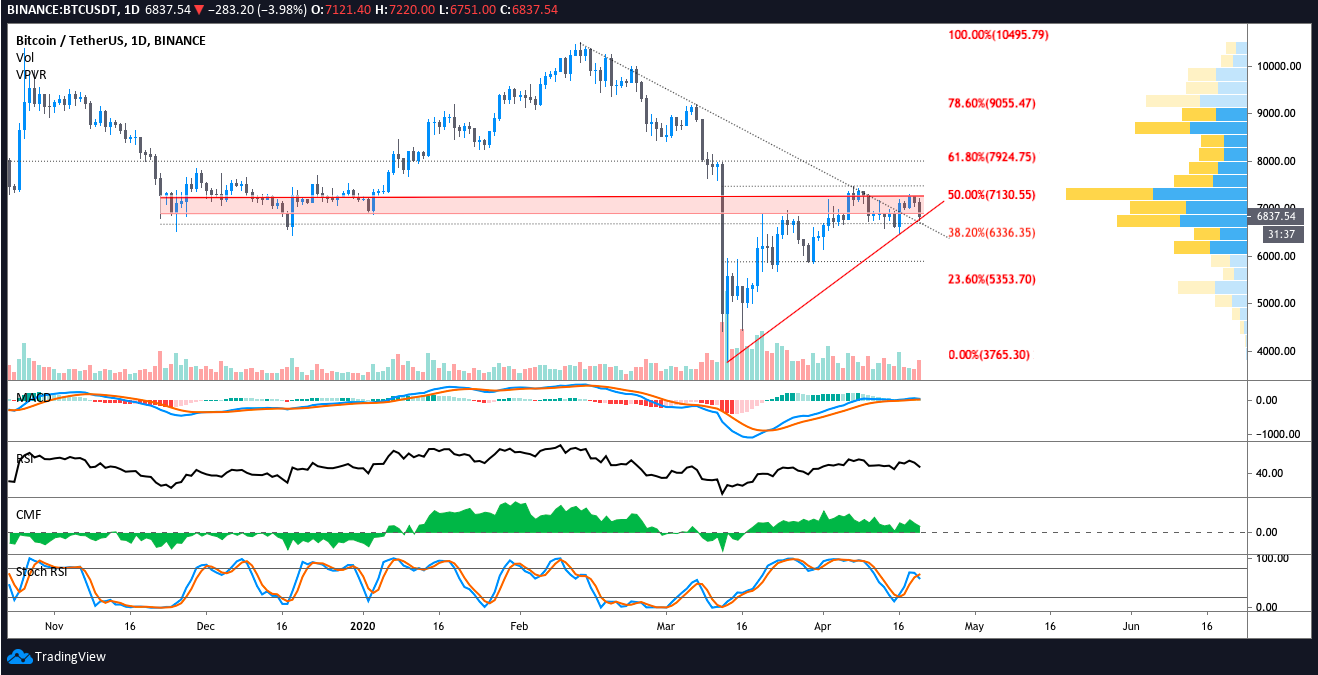 Ethereum also dropped by 5.8 percent. Some of the cryptos that suffered the most significant losses were Dash (DASH), with a loss of 8.9 percent, Bitcoin Gold (BTG), with a drop of 7 percent, and Bitcoin SV (BSV) losing 6 percent. Stellar (XLM) was the only one that managed to actually have some gains in this period, seeing an increase of 1.3 percent.

John Kilduff of Again Capital believes that the drop of the May contract was correlated to the fact that “the physical oil market conditions are a disaster, with growing concerns about finding available storage.” But he remains optimistic when it came to the long-term prognosis.

“The higher priced, longer-dated futures contracts are indicative of the market expecting some level of clearing in the cash market over the course of the next several months,” he told CNBC. “Given the rapid decline in the U.S. oil rig count and the expected cutback by OPEC+ members that is a reasonable assumption.”

He also noted that as other subsequent contracts reach expiration, they could also start their own “death march down towards the super-low cash prices.”

“I think the world is experiencing a paradigm shift away from oil so the historic highs we’ve seen in price might never come back.”

Tyler Winklevoss, Gemini founder, expressed how the oil crash proved that Bitcoin is one of the reliable financial options.

“After today, oil can no longer be considered a reliable store of value. Your next best options are the U.S. dollar (gulp), gold (scarce), or Bitcoin (fixed).”

Oil has a storage cost.
Speculators don't want to receive physical barrels of oil.
To avoid taking delivery they must sell the future before expiry.
Global pandemic has sent oil demand to zero.
Oil price war has sent supply to infinity. #bitcoin has no storage cost https://t.co/U4QAq7CAds

Various analysts speculate that the oil prices might bounce back up and that this decline into negative territory is merely temporary, expecting the price to shot back up to $20 per barrel once the next contract is established.

Oil manufacturers could sure use a difficulty adjustment right about now.

“[The] real price is what’s at the supply end of the pipeline, not the temporary depressed cash price at the delivery end. However, storage problems can be expected to hit the 6-month price in due course.”

Crypto analyst Peter Brandt, argued that Bitcoin is still in a historic bull trend, and he also supports that Bitcoin can be a store of value but is wondering whether the coin can live up to this expectation.

“How much blood will be on the street b/c of Crude Oil?

This is going to be ugly. Books will be written about today.”

“I understand the bullish narrative for $BTC relative to the: Fables of the Feds and their Frivolous Fiats The argument for the moon makes sense. My only question is whether Bitcoin is actually living up to its high expectations. This question does NOT make me a hater.”

WHY ARE gold, silver Bitcoin dropping in price. MANY REASONS. One is crash in oil. Real reason LIQUIDITY SQUEEZE Shortage of FAKE $ forcing sale of LIQUID REAL ASSETS gold, silver, Bitcoin for FAKE $. Buying opportunity if you can find REAL gold,silver&Bitcoin.

While prices are expected to recover once the May contract expires, the government is limited when it comes to measures to bring back some normality for the industries affected by this situation.

According to the newsletter of Mati Greenspan, crypto analyst and founder of Quantum Economics:

“By now, the current oil contract has actually dipped below $1 per barrel. It’s been quite amazing writing today and watching the price drop. People who write in the crypto market are already quite used to this phenomenon where you write something about the price, but then the volatility renders your theories useless by the time it reaches the public.

Strangely enough, the price of bitcoin today remains barely changed and is now holding just fine at $7,000 per coin. I’ve had a bit of fun on Twitter today trying to calculate the oil/btc ratio, but now that oil is trading for one cent, it seems kind of pointless.”

The recent oil price crash exemplifies what can happen when something used as a store of value relies on either consumption of that good or the fashionability of that good as a major basis of its value. Art, wine, gold, silver and #oil share this characteristic. Not #Bitcoin.

Bitcoin and the rest of the altcoin market seem to continue trading as usual in spite of the oil price going negative, with minor fluctuations that are considered normal for this type of asset.