Hard Drive Mining Explained | All You Need To Know 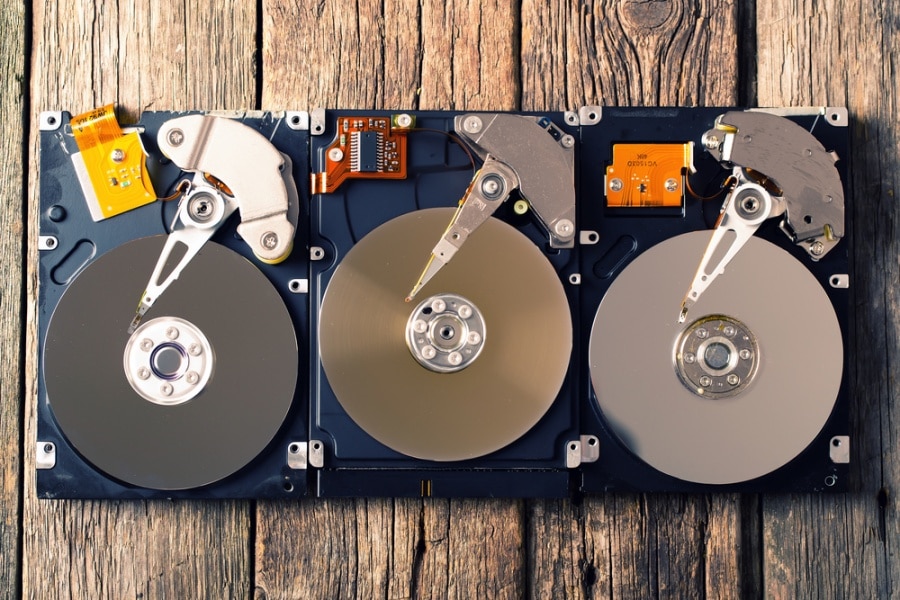 In today’s guide, we will be explaining what hard drive mining is and what processes are involved when creating new cryptocurrencies through this alternative method.

What Is Crypto Mining?

Cryptocurrency mining, or cryptomining, is the process of validating the transactions that are made using a certain cryptocurrency before they are added to the block of the digital ledger.

A cryptocurrency miner verifies the authenticity of the transactions and updates the blockchain with the transaction. Cryptominers compete to solve complicated mathematical equations using cryptographic hash functions, as the first miner who cracked the code gets to authorize the transaction. In return for this, he is rewarded with a small amount of the new crypto.
Depending on the mining protocol, the miner will require specialized hardware to perform the validation of transactions.

A blockchain protocol, also known as a consensus method, is a system that manages how consensus is reached and validates transactions within a blockchain network.
There are various types of protocols, some requiring physical mining equipment, while you just need to hold the coins in an active wallet.

Proof of Work is a mining protocol, which is also used by cryptos, such as Bitcoin, that requires a lot of mining power in order to compute the algorithms. Such type of mining requires setting up physical hardware rigs made out of ASIC miners or graphic cards, depending on the mining difficulty of the network.

Proof of Stake does not require physical hardware; instead, producing new coins through staking, a process in which network users hold their coins and leave their computer on. Staking rewards are new coins generated by minimum computing power.

Proof of Capacity is a consensus algorithm which instead of using ASICs computation to verify transactions, makes use of hard drives and storage. This is why this consensus model is used for hard drive mining.

This mining system consists of two parts: plotting and mining.

Plotting is when you generate a random solution, or a plot, via the Shabal cryptographic algorithm, that is then stored on the miner’s hard drive. The mining involves miners competing to find the solution, and whoever manages to find it first gets to mine the next block.

As a means of this proof, miners share their free disk space in order to create new mining blocks and receive a mining reward.

Proof-of-Storage, also known as proof-of-space or PoS, uses free disk space like PoC, but this protocol uses the free memory space to create decentralized cloud storage instead of generating new blocks.
In this storage system, users rent their HDD space to other users, and disk space owners are able to mine cryptocurrency using the blockchain’s resources. Unlike PoC blockchains, PoS blockchains give out cryptocurrency mining rewards by using the monthly payments received from space renting services.
Of course, there are many other mining protocols, but we have only showcased the most popular ones and the one that is relevant to our guide.

What Is Hard Drive Mining?

Hard drive mining is a way of generating cryptocurrency by using hard disk drives. HDD miners do not require graphics processing units like in GPU mining, or ASIC miners to produce new blocks in the distributed ledger. Instead, this method makes use of a set of hard disk drives.

In terms of setup and maintenance, HDD mining rigs are based on different principles compared to traditional mining farms. In order to create an HDD farm, you will need:
⦁ hard disk drives;
⦁ a computer;
⦁ display (monitor);
⦁ input devices (keyboard and mouse).

What sets this type of cryptocurrency mining apart from others is that it does not need any powerful GPU or central processor unit (CPU).
The essential features of an HDD that will influence the results of mining are the hard disk’s capacity and performance. When you use a separate GPU, you can also use a motherboard or CPU built-in GPU to mine with your hard disk.

How Does Hard Drive Mining Work?

Plotting is the process of pre-generating data blocks, or plots, on a hard disk drive. Compared to GPU mining, this may take more time, but it requires to be done only once while mining with your HDD.

Set who will receive the reward

After pre-generating the plots, you will be required to set who will receive a reward for creating new data blocks. When solo mining, you are the recipient of the reward. If you mine using a pool, the reward beneficiary is the pool’s wallet address.

After you have generated your plots and saved on your hard disk drive, you can start your mining software.
The software will analyze your data and calculate how much time it is required to generate the current data block. When the system decides on a deadline, your HDD will be idle until the next block is generated.

The best thing about hard drive mining is that your HDD remains idle most of the time, as the number of blocks stays mostly the same, and analysis for each block only takes a few seconds.

⦁ second-hand hard disk drives are not easy to find;
⦁ HDDs have a lifecycle of around 10,000 hours;
⦁ the mining process takes more time to mine the same amount of coins you would mine with GPUs;
⦁ you mine fewer coins than you would with GPUs.

Why not Use SSD?

Some might think that using a solid-state drive (SSDs) might speed up the data block generation process, but the performance of the storage device doesn’t influence the reward of hard drive mining.
SSD will only finish the initial plotting process faster, but the mining will still be the same. Also, SSDs have a much shorter service life than hard disk drives, while each gigabyte will have a higher cost.

Burst is a proof-of-capacity crypto that can be mined using a set of HDDs with a large capacity. High-performance mining can be ensured by using a higher number of HDDs which, as a result, will produce more mining rewards.

Sia is a blockchain-based cloud storage platform that offers similar services to Dropbox, Amazon, Apple, and Microsoft cloud storage services.
Sia users are able to rent out their free HDD space to other users, and what files they store are encrypted in the system. Smart contracts and proof-of-storage algorithms are used to validate Sia transactions and to keep files authentic.

With this, we conclude our guide on hard drive mining. We hope that the information we provided will be of help to those who are looking for alternative methods of generating cryptocurrency.