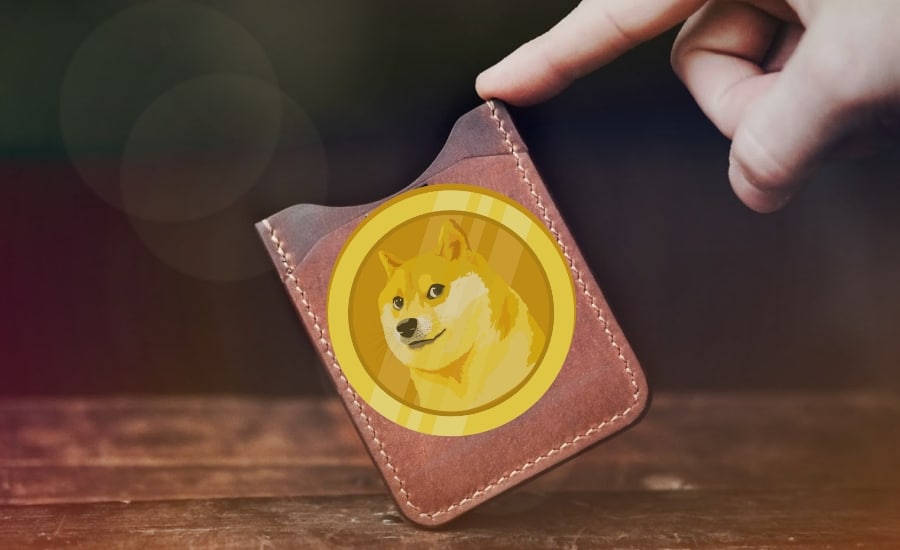 Even though Dogecoin started its life as a memecoin, the fun tongue-in-cheek nature of the coin attracted many from the crypto community, which is the reason why DOGE is still among the high market cap coins. If you are also looking to get your hands on some DOGE and need proper storage options, then continue reading our list featuring some of the best Dogecoin wallets.

We start our list with a hardware wallet, which is one the most secure storage options for cryptocurrencies.

Ledger Nano X is Ledger’s newest hardware wallet model and is regarded as the safest and most secure storage option, but Nano S is just as highly praised and at a more convenient cost.

The wallet boasts a wide range of security features that all work together to keep coins and private keys from hackers. In addition to Dogecoin, the wallet features compatibility with over 1000 different coins and tokens, with native support for 22 of them.

The Ledger Nano S has the aspect of a USB with an OLED display that can be operated with small buttons when you manually verify transactions. The Ledger features PIN, protection, dual-chip architecture, 24-word backup seed and restore feature, and 2-factor authentication.

Developed by Czech-based SatoshiLabs, Trezor Model T is among the top most reliable hardware wallets. Besides Dogecoin, the wallet allows you to store thousands of other coins.

Unlike its previous model, Trezor One, which is also a popular choice, this wallet features a color touch screen.

The Model T also features a USB-C connector and a MicroSD card slot. Even if the MicroSD is not functional at the moment, Trezor intends on using the slot for encrypting data, password management, and signing offline transactions. In terms of security, the wallet employs a 12word recovery seed, PIN Code, address verification, password manager, and 2FA.

KeepKey is another hardware wallet we have decided to feature on our list of Dogecoin wallets. KeepKey manages the private key generation, private key storage, and the confirmation of outgoing transactions. It has a secure interface that allows it to communicate with your computer while keeping the cryptocurrency offline on the device.

The wallet stores many of the top cryptocurrencies and ERC20 tokens, as well as Dogecoins.

KeepKey was developed by the same person that created ShapeShift, a fast crypto-to-crypto exchange. As such, the wallet has seamless ShapeShift integration, which enables the direct sale and purchase of assets from within the KeepKey device.

The device has the largest display compared to other hardware wallets. Also, the wallet is proofed against virus, malware, and hacker attacks. Moreover, it is protected by PIN security, a 12-word mnemonic recovery phrase, and tamper-proof firmware. 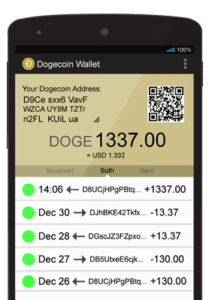 For those looking for a free desktop wallet, there is the official Dogecoin wallet. This wallet can be downloaded in the core wallet version, in which you download the entire blockchain, and a lite version called MultiDoge, which is mainly for storing and transferring DOGE. There is also a mobile version for Android devices.

The Core and Lite desktop versions are compatible with Windows, OSX, and Linux. Only the core version can be used for mining.

In terms of design, this is not the most appealing of Dogecoin wallets, but it has an easy to understand setup, and it’s simple to navigate.

MultiDoge was ported from the Bitcoin client, MultiBit, meaning that the developers copied the code from the MultiBit source and changed its compatibility to cater to Doge operations.

Users that prefer online Dogecoin wallets, there is DogeChain, which can be accessed via a browser. While the wallet is not praised for its security implementations, but for moving small amounts of DOGE, the wallet is a decent online choice.

All user data is encrypted, and none of it is stored on DogeChain servers; instead, the encrypted files are held in the cloud. The wallet is non-custodial, meaning that all the keys are under the control of the user.

Exodus is another desktop multi-crypto wallet, supporting more than 100 cryptocurrencies, including Dogecoin.

The design of the UI is not only sleek but aesthetic as well. This non-custodial desktop also features hardware wallet integration with some of the top devices, which enables you to exchange Dogecoins within the desktop app.

The wallet is built on a semi-open-source code and implements password protection and an automatic lock after a selected period of time. Exodus also has mobile versions for iOS and Android users.

Traders on the go, which would be much more comfortable using mobile Dogecoin wallets. For them, we recommend Coinomi.

This multi-coin wallet is compatible with both Android and iOS and supports 500+ cryptocurrencies as well as Dogecoin. The wallet also developed in recent years a desktop version.

The Coinomi stores the private keys and the transaction data on the user’s terminal device. All IP addresses are secured by separate encryptions, and the wallet is hierarchical deterministic. It also generates a seed phrase that enables you to back-up your wallet. However, Coinomi lacks two-factor authentication.

The wallet also features integration with the Coinomi cryptocurrency exchange. This allows its users to buy and sell cryptos directly from the wallet.

Jaxx is a multi-coin wallet that features cross-platform compatibility and supports Dogecoin, Bitcoin, Ethereum, Litecoin, Dash, Zcash, and 70 other cryptos.

The wallet is compatible with Windows, Mac, and Linux operating systems, as well as Android and iOS mobile devices. There is also a Chrome browser extension that allows you to manage your DOGE funds online.

Jaxx is non-custodial meaning all keys and data are stored locally on your device. Another feature is ShapeShift integration that allows you to perform crypto swaps without leaving the wallet.

This has been our list of the best Dogecoin wallets that you can find in 2020. We hope that the provided suggestions will prove helpful when you start searching for a DOGE storage solution.