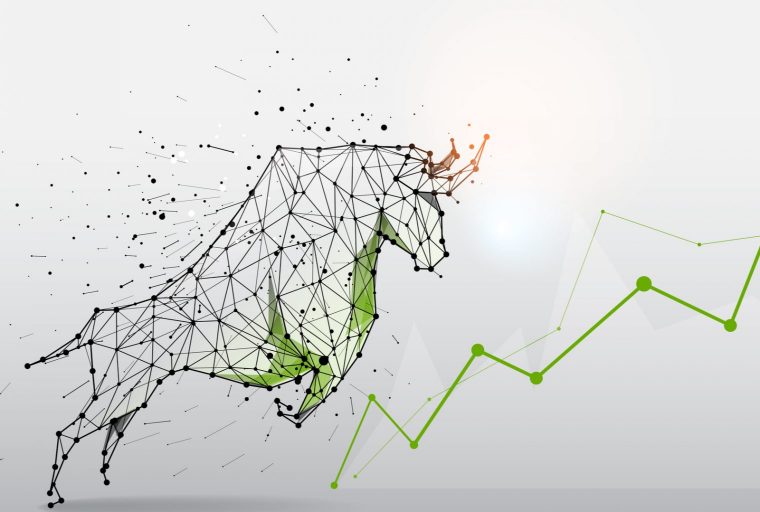 Even before 2020 began, traders and specialists started predicting and forecasting what can happen to the crypto market this year. Below, we will be looking into 5 bullish crypto facts for 2020.

This year, Bitcoin is scheduled to experience its third halving. Once every four years, the mining reward per block is halved in order to slowly decrease the rate of generating new BTC as the supply nears its end.

This May, miners will no longer get 12.5 BTC for every block they successfully mine instead, receiving 6.25 BTC. Why is this event considered bullish? A reduction in rewards does not seem like it would benefit miners.

If we look back to the 2012 Bitcoin halving and the 2016 halving, these events are actually good news for the Bitcoin community. By looking at past price charts, we can notice that halvings have been the catalysts for some amazing bull runs. The 2012 halving fueled the bull rally in 2013, and the 2016 halving foreshadowed the amazing 2017 bull run, which brought Bitcoin to its all-time high of $20,089.

Experts and crypto analysts also predict that the 2020 halving will fuel a new bull run for Bitcoin, which will propel the coin to new heights, but this is expected to happen in late 2020 or 2021.

There are already many merchants and online services that currently accept Bitcoin payments, such as Microsoft, and Overstock. Several payment services, such as Flexa, Coinpayments, Coinbase Commerce, and BitPay have enabled more merchants to support BTC.

Big companies, such as Whole Foods, Nordstrom, Starbucks, and many others have also begun embracing Bitcoin payments, totaling around 30,000 stores. This year, it is forecasted that this number will increase, which will further the Bitcoin and crypto adoption movement.

While the last part of 2019 was rather disappointing for ETH because of a decrease in investor confidence, which was mostly attributed to persistent scalability issues.

Ethereum missed deadlines and constantly postponed the much-awaited update to ETH 2.0 – a big upgrade that switched the blockchain’s current proof-of-work consensus algorithm to proof-of-stake. This shift would have allocated the miners’ tasks to special network validators.

The developers of the project then announced on Feb. 5 that they will be completing the upgrade on the networks’ fifth anniversary, July 30, 2020. “I have 95 percent confidence we will launch in 2020,” stated Ethereum 2.0 researcher, Justin Drake, on Feb. 5.

It appears that the team and Drake’s comments renewed the confidence of investors, as the cryptocurrency saw an increase of 8 percent the day the announcement was made, rising from $186 to $207. Also, in the next 11 days, the coin managed to reach $289.

“Investors likely bought into the promise of ETH 2.0, which is said to scale the Ethereum blockchain significantly,” stated Sharan Nair, the chief business officer at CRUXPay. Nair also speculated that some investors might have bought ETH in advance for staking after the protocol upgrade. It is expected that as the launch date approaches, the price of ETH will also see a bullish momentum.

Bitcoin derivatives on an array of platforms have noticeably seen an increase in volume and open interest in the past few months, which suggests that investors have been active on the institutional platforms that offer these services.

Analysts predict that new money will enter the bitcoin market through institutional platforms that offer crypto derivative products, such as futures, which will also fuel the next bull run.

Cryptocurrency derivatives trading reached its highest trading volumes of 2020 on January 11th, and that day BTC registered an increase of 9% and ETH 16%, according to data collected by Skew. 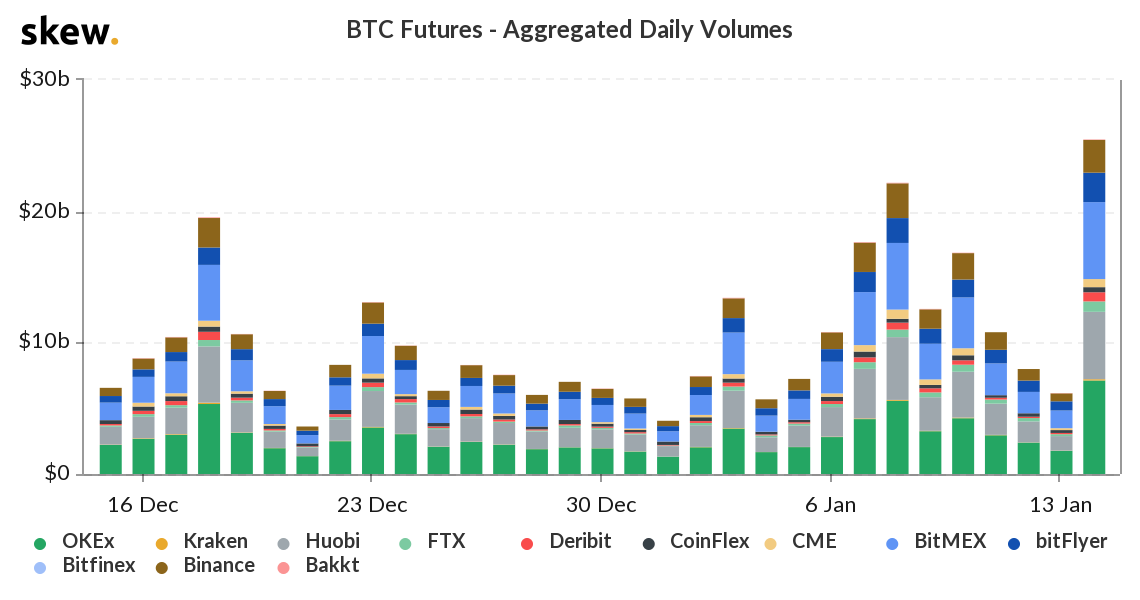 “The CME got a decent launch on day one on Monday, and that got a lot of people interested from the traditional market side,” said Skew CEO, Emmanuel Goh.

“For me, it’s a sign that the market gets more mature and sophisticated. And the price surge: inevitable when more and more players are entering the market, we continue to see more interest from new parties in Bitcoin. Eventually, you can see that in the price action as well,” wrote Deribit COO, Marius Jansen. 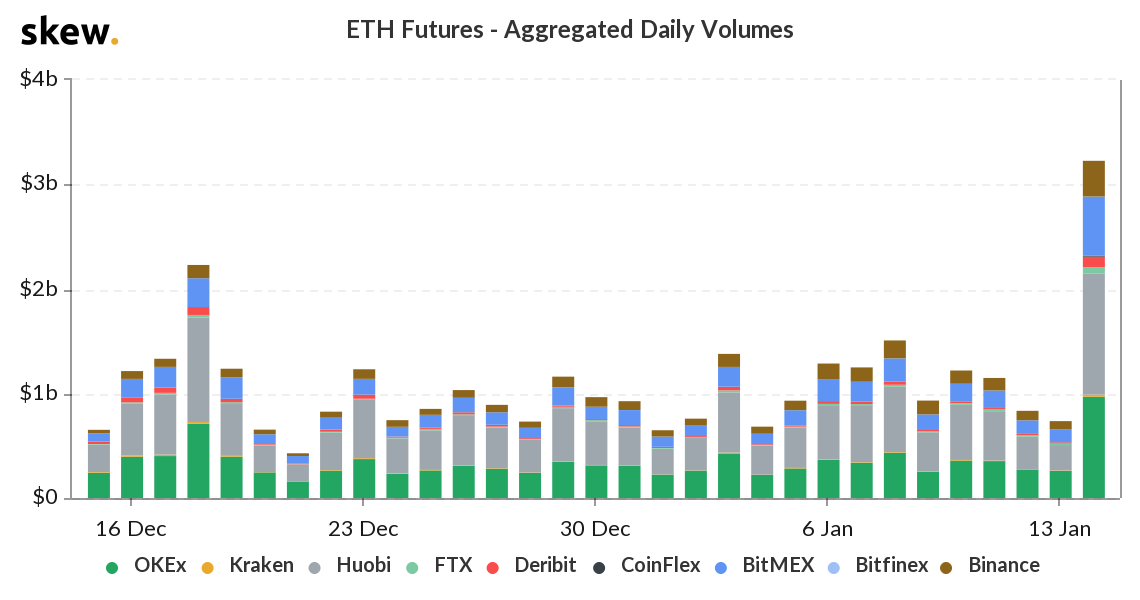 2020 is forecasted to be a lucrative year for the crypto derivatives market, as platforms such as CME and Bakkt and exchanges such as BitMEX, Deribit, and OKEx compete in this market.

Bakkt’s successful launch of regulated Bitcoin futures contracts might be followed by other platforms and companies looking to tap into this market. And with the entire Facebook Libra situation in which the SEC is monitoring the project intensely, there will be no doubt a propensity for launching fully regulated crypto products.

Analysts have predicted that this will represent a bullish fact that should bring a new influx of capital to the market this year.

While there is no way of exactly predicting how things will pan out for the crypto market, there are a few indicators and events based on which we can expect some bullish outcomes for 2020.