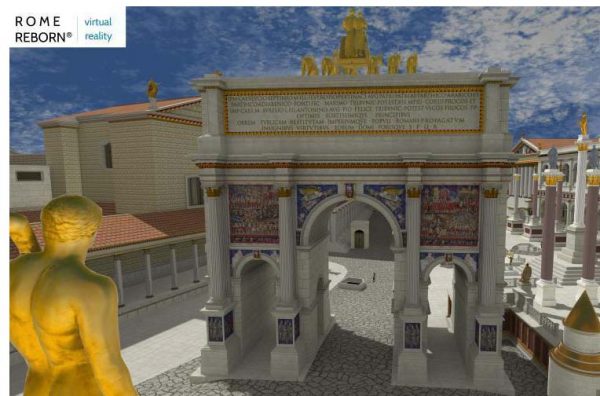 In the past year, we have seen several ancient cities bring brought back to life through immersive virtual reality. The latest city to go virtual is ancient Rome. A new VR rendering is bringing the old imperial city back to life in a beautiful and gilded form.

In this virtual reality project, some 50 computer experts and academics have finally completed a ten-gigabyte virtual Roman world that they have been working on for the past 22 years. Dubbed Rome Reborn, the virtual reality project consists of some 7000 buildings and temples that occupy an overall five square miles. The project represents the largest digital reconstruction for an ancient site.

The digital reconstruction was steered by Bernard Fischer, an information technology professor from Indian University who is also the project’s digital archaeologist. The academic team guided the computer modeling experts in recreating a historically accurate rendering of ancient Rome. The VR reconstruction covers Rome in its ancient glory in AD320. This date was chosen as it is farthest back in time during which the most information about the ancient Rome can be gleaned. After 320AD, Rome’s capital was shifted to Constantinople. The project will not just be of interest to academics and cultural connoisseurs but also tourists who want to travel back in time.

Prof. Fischer first came up with the idea of reconstructing the monuments of the ancient world in 1974 but back then, the virtual reality or augmented reality technology didn’t exist to bring these wondrous past back to life.

The team had to redesign the project thrice, constantly making adjustments to account for the advancements in VR/AR technology. 22 years and $3 million later, the impressive, detailed and historically accurate project is now ready for exploration.

With the current rendering, a user will be able to fly over ancient Rome while also stopping to explore some of the most iconic Roman landmarks such as the Basilica of Maxentius, the Roman forum and the Constantine. Throughout the project, the team of archaeologists has been on hand to provide expertise to ensure a historically accurate rendering of ancient Rome.

The Rome Reborn virtual reality reconstruction allows users to fly through the city in a virtual hot air balloon. Through this virtual world, they will be able to teleport themselves to various important sites in ancient Rome and also get some detail about these sites.

The project is not yet complete. Some sites are still under development and the team plans to add additional iconic sites such as the Pantheon and the Colosseum. It provides for a very versatile rendering of the ancient sites, enabling users to switch between views and get various perspectives of monuments ranging from the ancient sites as they looked back then, the ancient ruins and the monuments as they look today. With more layers of functionality, users will be able to do much more than just sightseeing. For example, they will be able to train together with other users as gladiators inside the Colosseum or racing around Circus Maximus in chariots.

The company behind the Rome Reborn virtual reality reconstruction Flyover Zone has other ambitious plans to virtually reconstruct other ancient cities such as Jerusalem during the times of Christ and Athens in the times of Socrates. To explore some of the sites such as Caracalla thermal baths or Emperor Nero’s Domus Aurea, you will need to use VR goggles on site.